Is inflation heading back to the past?

Is inflation heading back to the past?

For many investors, references to the double-digit inflation of the 1970s bring back unwanted memories. Others may not remember this period at all, having grown up and entered financial markets in the subsequent period of the 'Great Moderation'. Indeed, for much of the past 30 years, inflation has largely been absent, with a broad array of factors – including central banks fixated on holding inflation in check, demographic shifts, technological advances, and globalisation – keeping the cost of living muted.

But in 2021, like the phoenix rising from the ashes, inflation is back as a hot topic in
financial markets.

Diverse inflation regimes from the 1970s to the pandemic

Inflation – in tandem with economic activity – fell heavily as the world came to an abrupt stop in 2020. Today, it is rebounding quite rapidly. A significant reason right now is that year-on-year comparators of inflation (which compare current data with data from the exact same period in the previous year) have been picking up the ultra-low readings taken at the height of the pandemic. This is known as the base effect.

The debate in financial markets, and in the corridors of power at central banks, is whether the higher levels of inflation we are currently experiencing are merely the base effect playing out (and are therefore ‘transitory’) or whether we are walking slowly into a world where higher inflation is the norm. Some commentators are even daring to whisper about the 1970s again, as central bank and government policymakers seek to stimulate broad-based economic recovery and reduce inequality, perhaps at any cost.

We would argue that a return to 1970s-style inflation is a very remote possibility; however, the inflation regime which persisted from the 1990s until 2014 might provide a more realistic point of reference. During this period, the inflationary backdrop in the US was characterised by medium-term inflation expectations averaging over 2.5%.

Following 2014, this average dropped to around 2% as the US Federal Reserve Bank
(Fed) moved from a policy of ‘forward guidance’ (signalling the likely course of policy decisions in advance) to a data-dependent approach. Under the latter system, the implication was that the Fed would be highly reactive in its policies, aiming to prevent any whiff of medium-term inflation expectations moving above its stated target of 2%. This period was also characterised by cheaper oil, as advances in fracking (a technique used in the extraction of natural gas or oil from shale rock) increased the oil supply and deflated oil prices.

How will inflation look in the post-pandemic era?

Today, major central banks like the Fed are willing to let inflation ‘run hot’ –
allowing inflation to rise above stated targets for a period, in order to make up for
it undershooting those same targets in the past. This is known as Average Inflation Targeting (or AIT). Meanwhile, deflationary factors like the effects of fracking on the oil price have peaked.

Over the first four months of 2021, the market seemed to be signing up to a period
of higher inflation, perhaps akin to the pre-2014 era. Inflation expectations among investors rose aggressively, with signals from bond markets (real and nominal bond yields) following suit, and the parts of the stock market most sensitive to economic cycles and best suited to passing on price increases in an inflationary world outperformed.

However, since early April, these moves have largely reversed, and investors now seem to be signing up to the view that any inflation worries will be temporary (transitory). Importantly, this new market view has taken place while headline inflation numbers around the world have continued to rise to levels not seen in well over a decade, or longer. Also significant is that while the market may have dialled back its view of the medium-term inflationary picture, measures of consumer expectations still point to a higher inflation regime ahead. 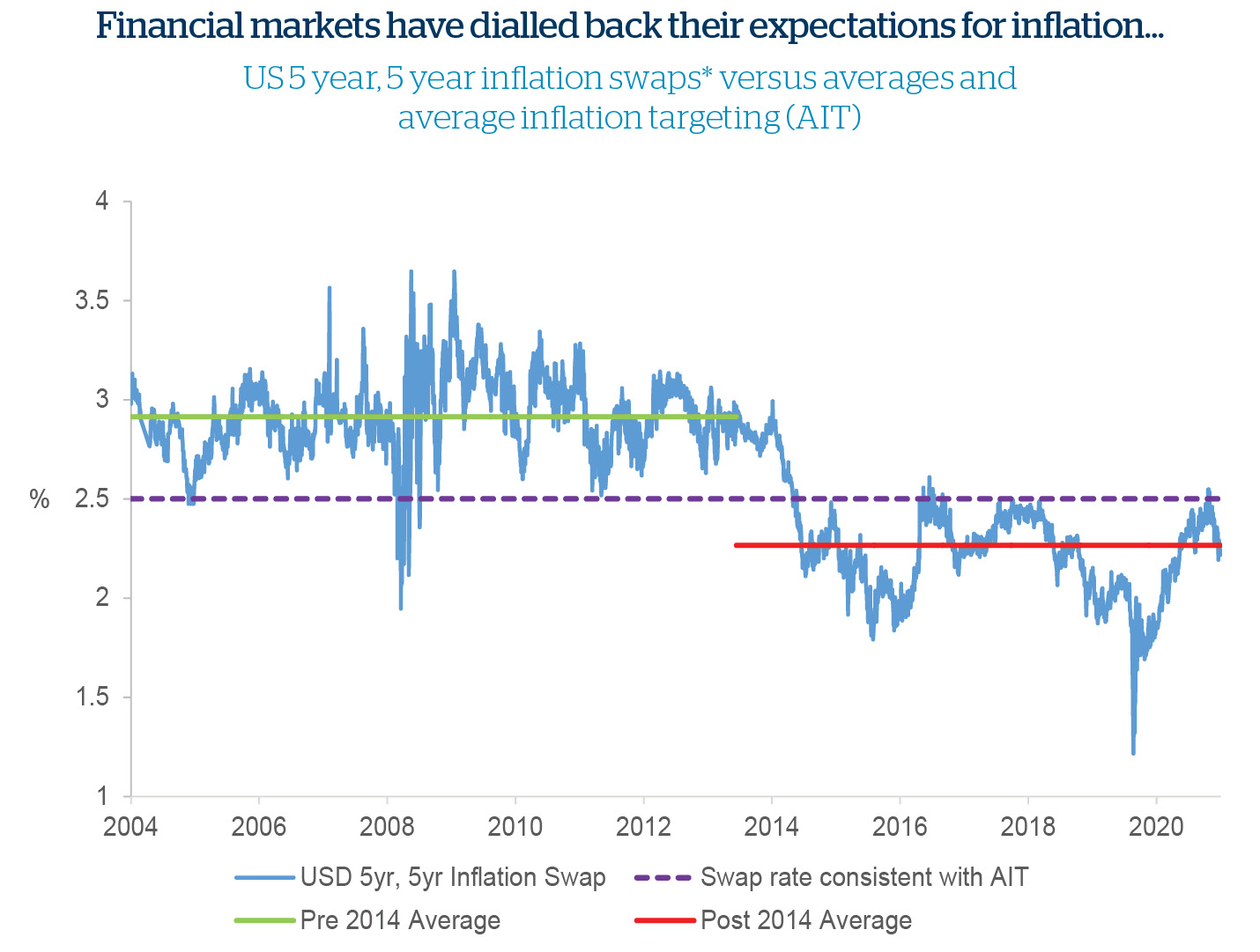 Source: Bloomberg.
*The ‘5 year, 5 year inflation swap’ charts the expected rate of inflation (on average) over the five-year period beginning five years from any given point. 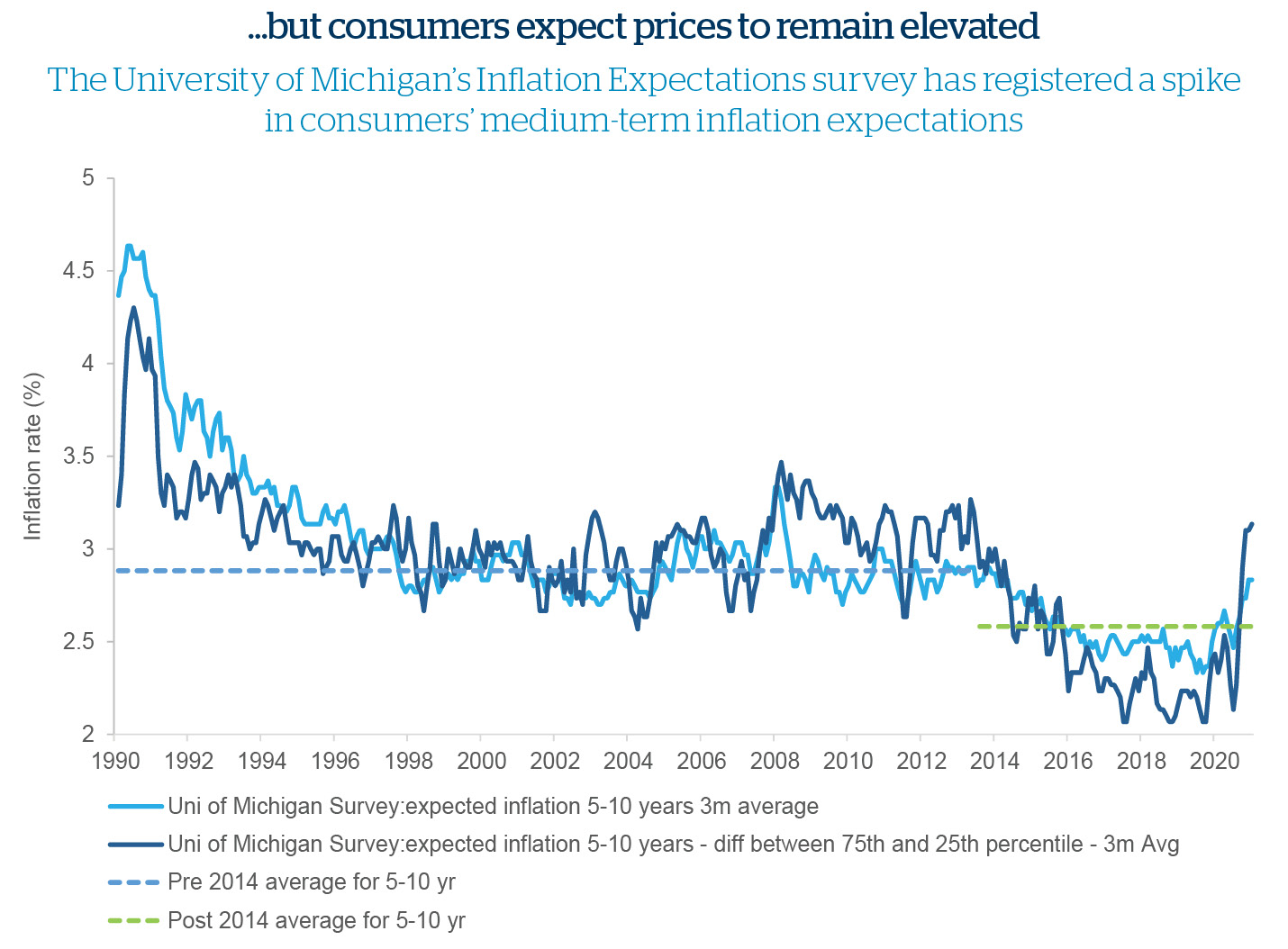 Source: Bloomberg. The UoM Inflation Expectations survey measures the percentage that consumers expect the price of goods and services to change during the next 12 months.

Taking the US inflation numbers as an example, it’s clear that the base effect we referred to earlier is partly responsible for recent rises in headline inflation. Areas hit hard by
the pandemic are beginning to recover (i.e. used car and trucks prices, airline fares, or commodity costs such as gasoline), encouraged by economic reopening and the freer flow of people after months of restrictions. Meanwhile, supply chain issues, stemming from parts of the world dealing with ongoing COVID-19 waves, are leading to price rises in areas such as shipping costs and commodity prices. However, all of these, though painful in the near term, should ease over time as movement and business activity normalise. 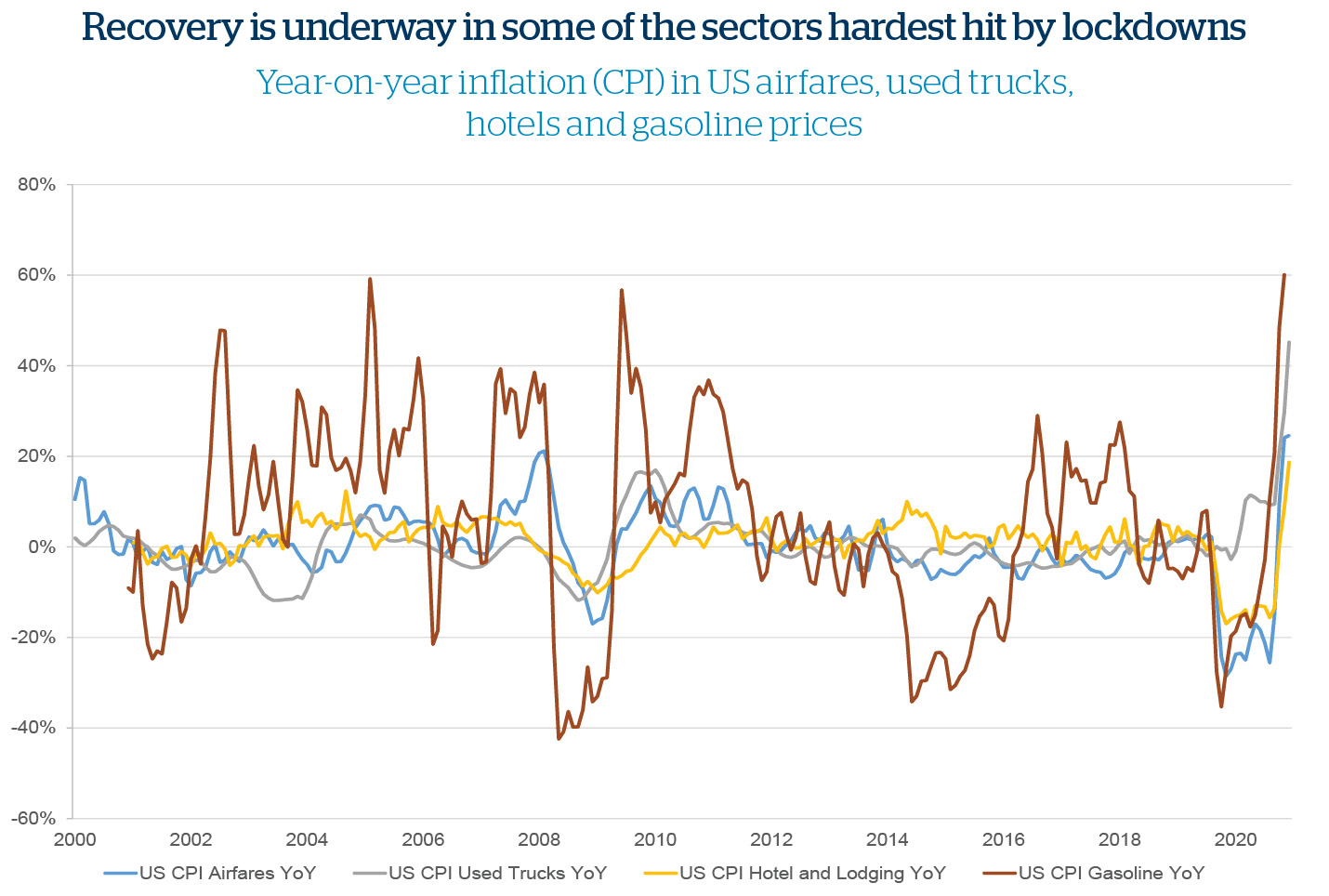 Is higher inflation here to stay?

We subscribe to the view that much of the current rise in inflation is transitory, and will fade. Positioning within our investment strategies reflects that view.

It remains extremely difficult to create durable and troubling inflation in a world saddled with debt, and with employment markets around the globe still well below pre-pandemic levels. Nonetheless, we remain vigilant to two key factors which could alter our view: wages and rent:

The future path of inflation remains one of the most difficult things for investors to forecast accurately – for policymakers as well as the wider population. We do believe that inflation will be positive over the medium term, and that central banks will tolerate inflation for longer before raising interest rates. From an investment perspective, this means that holding wealth in cash remains an unappealing option, particularly after adjusting for inflation and taxation. With this in mind, we continue to believe that a global, multi asset approach, aiming to deliver returns above inflation over the long term (in exchange for a commensurate level of risk) provides an attractive investment solution.

Will Scotland’s general election pave the way for independence?

Five things income investors should learn from the global pandemic